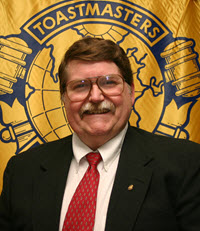 When faced with some new challenge, have you ever caught yourself saying or thinking "I'm not ready"?  What did you do about that? Did you heed that terrified little voice inside screaming "Run Away! Run Away!"? Or, did you hunker down and "just do it anyway"?

To anyone who's ever faced an incredible challenge and said or thought: I'm not ready.

Boy do those words bring back memories!

The year was 1986. I noticed a poster advertising a Speechcraft – an 8 week public speaking class taught by a Toastmasters club. I wasn't ready for that! I was terrified of public speaking! I couldn't even stand before two or three people and lead a silent prayer! Yet, I signed up anyway.

The first week was orientation at which they announced we all had to give speeches the very next week – something called an Icebreaker.  Were these people nuts?? But wait, it gets worse: because this was a class, they told us we had to give a speech EVERY WEEK!  I almost fainted!  But I'd signed up for the course, I paid my money, I couldn't back out now, what could I do?

That next week I presented my Icebreaker. It felt horrible!!  I had a rock in the pit of my stomach, every muscle trembled, I sweat buckets, I blurted out words so fast nobody could understand me. I hated it!!! Until I was finished ... then, I realized: I had just confronted one of my biggest fears – attacked it head-on and won that battle! Oh, that felt so powerful, I couldn't wait to do it again!  And so I did: the next week, and the next, and the next.  Little did I know those first baby-steps, outside my comfort zone, would be the start of a fantastic public speaking journey facilitated by Toastmasters.

With each speech it got just a little bit little easier. As my skills, confidence, and poise grew, they pushed fear farther out of my life.  At the end of the 8 weeks I had progressed far enough that I wanted to continue that experience.  So when the hosting Toastmasters invited us to join their club, I did.

About four weeks later my club was asked to put on a demonstration meeting for a group of National Guardsmen who thought they might want their own Toastmasters club.  I was asked to present my Icebreaker again.  What, in front of a room full of strangers? I wasn't ready for that!  They talked me into it.  I think they wanted to show just how bad a speaker could be!!  I spoke first.  Speaker number two was Distinguished Toastmaster, Accredited Speaker, past International Director of Toastmasters Frank Slane, DTM – one of the best speakers I've ever heard!  I think we were intended to be a study in contrasts: me the "before", Frank the "after".  From such humble beginnings, look how far you can progress!

I stayed with that group, helping them start their club, eventually joining it. That room full of strangers became a room full of good friends.  I spent 3 wonderful years with an awesome group of people that I never would have even met had I waited until I was ready.

Later that year my club announced they were going to conduct a speech contest. I didn't have a speech, my communication skills sucked, I wasn't ready for that! But, just to see what would happen, I signed up anyway. Imagine my horror when I learned I would be competing against my mentor – an advanced Toastmaster with YEARS of experience. No way could I EVER be as good as him!! I was going to be publicly humiliated, embarrassed, I wasn't ready for that!! So, I wrote the best speech I could, I practiced it relentlessly. Then, on the day of the contest, a funny thing happened ... I won! I beat my mentor!!  I went on to win the Area Contest beating experienced speakers from other clubs! Can you imagine what that did to my confidence?

In later years I went on to win contests at the Club, Area, Division, and District levels of competition.

In my second year, I was invited to join an advanced club, where I began designing 45-60 minute workshops. In my third year, I was invited to present a 45 minute workshop I had designed, at a Regional conference, to an audience of 150 people from nine states. They loved it! I loved it!  We had a blast! Written feedback I received said it was by far the best presentation most had ever seen on that subject!  This from someone who just 3 short years before couldn't even lead a silent prayer! My god how far I'd come!!

Does this sound like the kind of progress you'd like to make? It ALL happened because I stepped outside my comfort zone and did that which terrified me – that for which I was not ready.

After I'd been a Toastmaster about six weeks, my club asked me to run for club office: Sergeant at Arms. Me? Terrified, shy, wallflower me?? A club leader??? I wasn't ready for that! They told me they'd coach me. They said the District would provide training. I didn't know what a District was but it sounded like it might help. Against my better judgment I let them talk me into it.

My better judgment was wrong!!  I had an incredible term of office doing all kinds of things I never dreamed I'd ever do – including hosting a speech contest between multiple clubs: scheduling venue, arranging catering, coordinating all that.  Little did I know that those baby steps, outside my comfort zone, would be the start of an incredible leadership journey through Toastmasters.

Six months later, I was President of that club!  Oh man, no way was I ready for that! I had no idea what I was getting myself into!!  My term of office was full of all manner of challenges and frustrations.  But, I was surrounded by a talented team of officers who, just like me, were operating outside their comfort zones, learning under fire, doing that for which they were not ready.  At the end of our term, when we reflected on what we had accomplished – it was simply incredible!!  We had taken an already strong club and made it even stronger.  Would you like to lead people to achieve success like that?  Mere words can't describe how wonderfully rewarding that feels.  So much so, I would do that again. And, I have – many times in multiple clubs.

Somewhere along the way apparently I've become some kind of a role model.  I never intended that to happen, I never wanted that. Yet many have told me they really like my speeches, that they value my feedback. I've even caught some Toastmasters imitating me. I'm flattered but I was absolutely NOT ready for the feedback I received in May of 2003.

Dave said: "Rick, very early in my Toastmasters experience, when you and I were together in the Flagship Speakers club, I don't think I ever told you that you were my role model.  I wanted to have the skills you had, to be able to do the things you could do.  Your encouragement, your coaching, your feedback gave me the courage to stumble through those early presentations, to stick with the program. Your example gave me the courage to run for my first club office, then another then another – eventually taking me into District Leadership. Quite literally, if it had not been for you, I would not be here today".

Wow! When you join your first Toastmasters Club you have absolutely no concept of the impact you will have on the lives of others - just because you help THEM step outside THEIR comfort zones to do that for which THEY are not ready.  Would you like to have that level of impact? Dave did – on me...

He who was once the student is now the master. I'm now following in Dave's footsteps. In June of 2004 I accepted the position of District 25's Area 54 Governor, responsible for 6 clubs. I wasn't ready for that, which is EXACTLY why I took on the job.

My greatest life's lessons, my greatest accomplishments, my greatest experiences and friendships have ALL been forged by the duress of doing that for which I was not ready. Life's challenges don't get any easier! By stepping outside our comfort zone we just become better equipped to deal with them.  So much so that these days my life is guided by a compass that points to "not ready".  Not ready? Full speed ahead!  I can't wait to see what I learn this time!

My year as Area Governor held the biggest frustrations and challenges I'd EVER experienced in Toastmasters!  But, at the same time, it was by far the most rewarding experience I'd ever had!  Under my care Area 54 chartered a new club.  6 of those 7 clubs finished my term measurably stronger than they were the year before. Five clubs finished their year as "President's Distinguished" – the highest level of achievement a club can earn. For three clubs, it was the first time they'd EVER done that. Because of their strong performance, I was awarded Division E's "Area Governor of the Year" and Area 54 earned "Presidents Distinguished Area" recognition - the highest level of recognition an Area can earn.

That, in turn, helped Division E, led by David Watkins, become President's Distinguished, the highest level of recognition a Division can earn.

Which helped District 25, led by Lee Alviar, become one of only 6 districts in the entire world, the ONLY District in the United States, to finish their year President's Distinguished – the highest level of achievement a District can earn.

Would you like to achieve success on that scale? To influence others to do the same?

ALL of that happened because so many Club and District leaders led by example, to become and create an army of Toastmasters, stepping outside their comfort zones, completing incredible, sometimes impossible achievements for which they were not ready.

I just can't describe how wonderful it feels to have played some small role in all that.

So how do you top that?  In May 2005 I was elected Division E Governor, responsible for 23 clubs. I wasn't ready for that!  Which is how I knew it was going to be an awesome year! Since then I've gone on to tackle even bigger challenges for which I was not, and am not ready. It's what I do, I wouldn't have it any other way!

So again I ask: what challenges terrify you most? What whips your little voice inside into a frenzy screaming "I'm not ready! Run away! Run away!" What will YOU do about it?

I challenge YOU to set YOUR life's compass to point to "not ready", to cast aside your fears, to charge off into the abyss, and just "do it anyway". The lessons, the accomplishments, the experiences of a lifetime await you.

Not ready? Full speed ahead!

Why not leave me a comment sharing your experiences with the "not ready monster"?